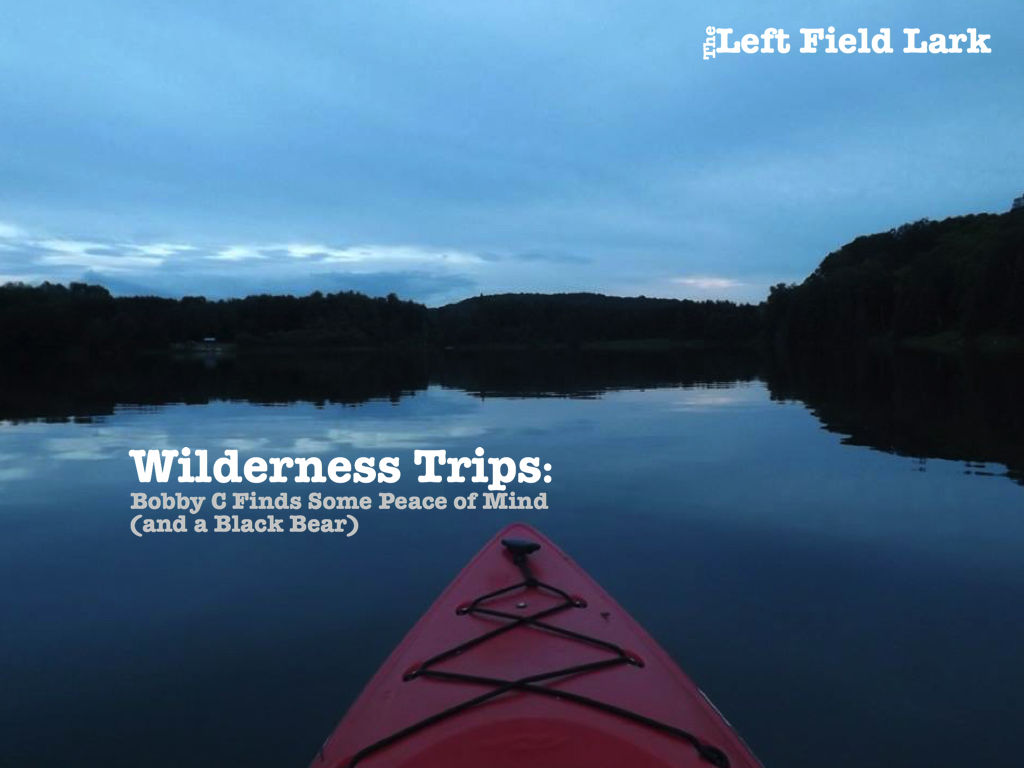 Imagine waking up to the sound of a black bear rifling through your cooler a mere 30 feet from where you are sleeping.

That’s what we experienced this past weekend after we travelled four hours from home to enjoy a peaceful vacation away from our busy, cell phone/laptop/television filled lives. Camping in the wilderness is much different than camping at a campground. For one, you don’t have to deal with loud, obnoxious neighbours blasting Kid Rock’s ‘All Summer Long’ or ‘Cruise’ by Florida Georgia Line (if you do happen to hear these songs in the wilderness, you are camping in the wrong location). Secondly, it provides you with an opportunity to close off your mind from the outside world and simply become one with the environment. If you have never experienced a weekend camping excursion away from the suburbs, I think you should start planning one. We often come up with excuses to remain tethered to the things that stress us out whether it be work, family, work, laziness or work.

In this thing called life, everyone is looking to find their ‘inner self’ or ‘inner peace’. Some find it through meditating, some through hallucinogenic drugs, some through art or music – but sometimes all it takes is a weekend away with some peace and quiet without pollution, car horns and notification ringtones. There were a few times last weekend that I caught myself letting my mind drift off into a state of awe as I was surrounded by everything – and nothing – all at once.

We were camping at a family cottage located within the community of Eagle Lake in Haliburton County. Located on the top of a steep hill and completely surrounded by thick forest, the cottage offers a picturesque view of ‘Still Lake’, the massive, private body of water that is located at the bottom of the hill.

At night while relaxing around a roaring bonfire you could see a thousand stars by tilting your head back and gazing up at the clear, close sky. One could easily fall asleep by just closing your eyes and listening to the ONLY sound within a kilometre radius – the crackling of the burning wood. If you are close enough to the fire (and can handle the intense heat) there’s no need for mosquito repellent. Otherwise, you’d better lather up.

In the mornings, after our cup of coffee, we’d head down to the lake. Fishing, kayaking, lounging, eating, drinking, what more could you want? My first time in a kayak was two years ago. Being a weak swimmer, I was petrified. Now, it takes no coaxing at all to get me into one. There is absolutely nothing like floating around the edge of a lake taking in all of the scenery and trying to catch a glimpse of either a turtle, a loon, or some other form of wildlife. Last year we saw two baby deer about 50 feet away from us stopping for a drink of water before running back into the bush. No such luck this year. 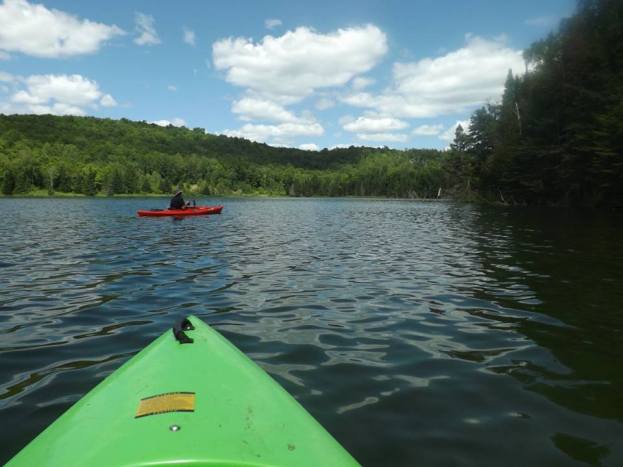 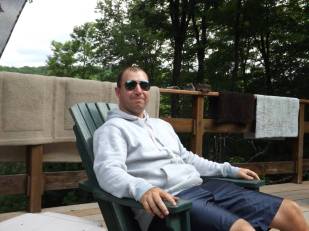 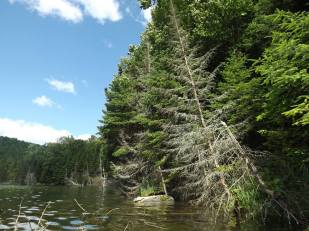 I had never heard a loon until visiting this cottage two years ago. I can’t really find the right combination of words to describe its’ haunting call. It’s something that goes along with the whole wilderness package. Hand-in-hand with the star filled skies and the endless amounts of dragonflies landing on your shoulder. It’s something that you just have to experience for yourself.

Saturday evening we decided to stay down at the lake until sunset. I ventured out in the kayak in need of some quiet alone time. The wind had died down and the lake was as still as a sheet of glass. I started paddling along the edge of the lake to listen for any cracking of tree branches, which would indicate that there were deer, moose or even a bear nearby. I found myself drifting into the middle of the lake. I looked up and took in my surroundings. It was at this moment that I was at complete peace. The sun was down, the wind was calm, the waters still, you could probably hear a bird chirping in another town. I was unmistakably one with nature. I found the sudden urge to take a bunch of pictures to try and capture the moment. After about five minutes, I realized that the pictures wouldn’t give anyone else the same experience, I just took some deep breaths and relaxed.

The next morning, we were woken by the sound of ice/water in our cooler swishing around. The next noise I heard was my mother-in-law frantically saying, “bear… BEAR”. The next thing I heard was my wife saying, “Where’s the camera?”. As I peaked outside, I managed to catch the tail end of a small black bear meandering through the forest and down the hill towards the lake. Once we headed outside to investigate, we noticed that the bear left mud behind on a table a few feet from where we were sleeping as well as mud on the side of the truck where it was scavenging for food in our cooler. Looking back on this experience, if I had to pick one emotion that overpowered the flood of emotions I was feeling at that moment, I’d have to say that powerless is what stood at the forefront. Powerless, because at any moment the bear could have returned and attacked one of us. We were completely at this bear’s mercy – and it chose to just look for some food and wander off on its own way. 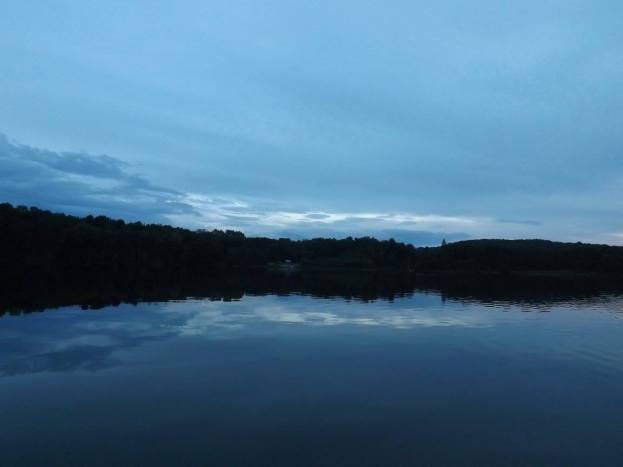 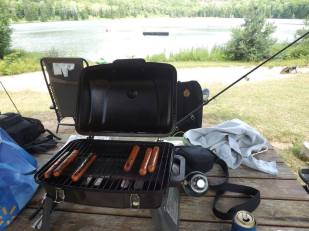 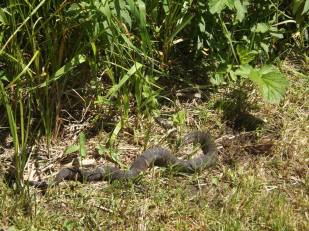 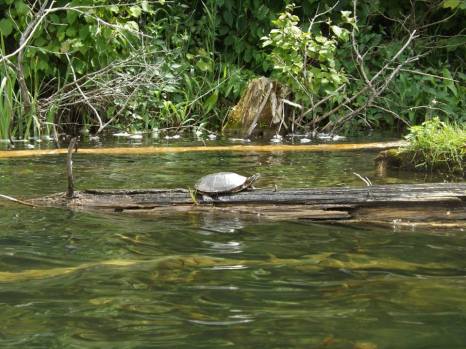 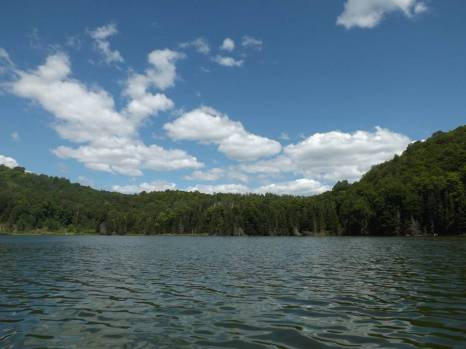 To conclude, getting back to your roots – not just YOUR roots, but the roots of human beings and of the world in general – is something that is needed from time to time. Just to sit back and listen to animals that you ordinally would not have the opportunity to hear is a fantastic and humbling experience. To think that not that long ago (100-200 years) there was absolutely nothing for miles and miles except for bears, loons, deer and moose looking for food and running through the forest. I hope that everyone takes the opportunity to enjoy nature in their own way and find some sort of inner meaning. I have, and I won’t forget it.