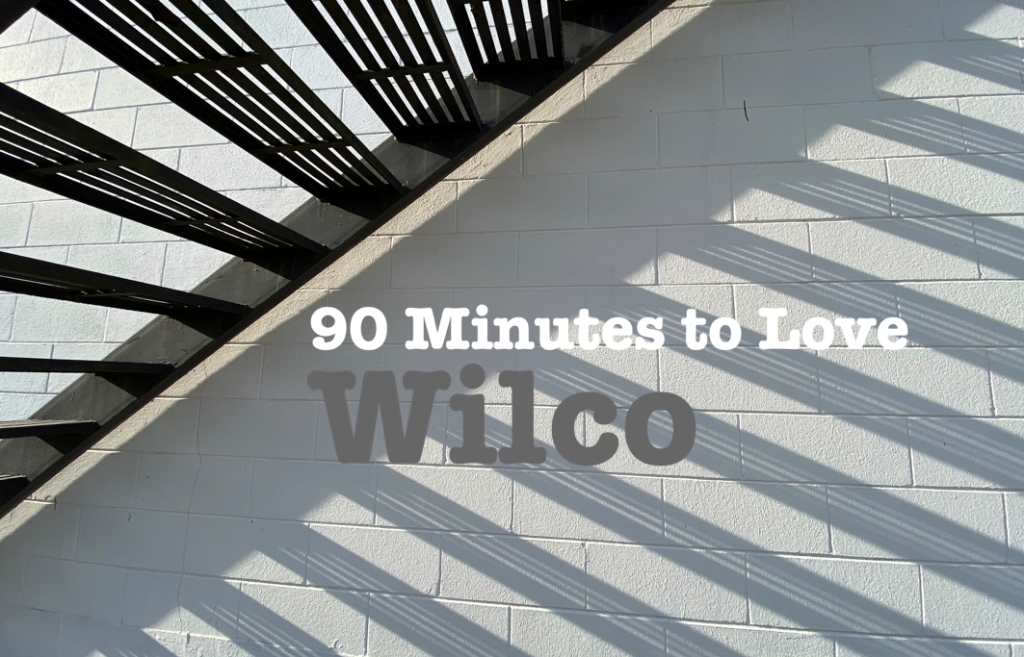 In the prodigal son parable, the son, reared in a loving family, nonetheless finds it necessary to leave home and venture out into the external world of unknown possibilities. After an extended time period away the son realizes it is time to come home and his return, instead of being greeted with bitterness and resentment, is received with a warm, loving, embrace.

In the late 90s, early 00’s, Wilco was my go to band. The band provided me exciting, evolving, material that indulged my love of distorted guitar sounds, sunshine on your shoulders acoustic guitar, too many drinks-too many cigarettes, after hours bar, vocals, veering from quiet introspection to the chest pounding release of scribbled on a napkin poetry. All unevenly, unpredictably, combined to manifest in a soaring and fluttering, half-world-beaten, half-undefeatable, migratory bird. But the potent love waned.

I have held off on doing a 90-minute playlist on Wilco for as long as I could. Why did I hesitate? Well, probably a lot of reasonable and unreasonable reasons. First, the aforementioned complicated relationship with the band. Second, I really wondered if it was all that necessary, as in- Do you really need me to tell you about Wilco? Don’t you already know? Haven’t they been regaled enough? (and maybe, more unflattering for me, “Is it still cool to love Wilco?“)

In revisiting the 90-minute-ish playlist I had created though I decided to share it for the simple reason that it’s truly special, truly unique, stuff. And maybe you don’t know. So, let’s talk about Wilco, their music and my complicated relationship with it.

In 2002 David Fricke reviewed Wilco’s breakout album Yankee Hotel Foxtrot beginning with noting the tumultuous history of the album, “Last summer, after completing their fourth and best studio album, Yankee Hotel Foxtrot, alternative-country idols Wilco delivered the record to their label, Reprise. The company reacted as if the music was caked in anthrax, throwing the album back at Wilco and arranging for them to leave the label — immediately.“

In the early 2000’s Wilco were the poster band for the alt-country genre that seemed to suddenly be in fashion. Wilco wasn’t the first alt-country band, many would argue they weren’t the best (whatever best means in art) but they were definitely the alt-country IT band at the time. Yankee Hotel Foxtrot, the story of overcoming belligerent major label incompetence, the album itself as a leap in their musical evolution, was/is the bands defining moment.

In his review Fricke characterized the off kilter album as, “… an earthy, moving psychedelia, eleven iridescent-country songs about surviving a blown mind and a broken heart. In Yankee Hotel Foxtrot, Tweedy, bassist John Stirratt, keyboard-guitar player Leroy Bach and drummer Glenn Kotche actually bring you the enchanting sound of things falling apart — and gingerly, doggedly coming together again. This is an honest, vivid chaos, and it tells a good story.“

I had fallen in love with Wilco in 1998 when I stumbled upon the bands great Being There album which had almost a kind of punk urgency, a certain recklessness reminiscent  of The Replacements in their prime while channeling the warmth of Desire era Dylan, Willie and the Poor Boys era Creedance Clearwater Revival often accompanied with Cortez the Killer era Neil Young fuzzy guitar. Being There was fun, it was deep, it was hypnotic, it was unafraid to make a lot of noise.

My next Wilco discovery was in a record store one Saturday in 1998 (proving great things can happen in malls beyond smoothies and giant pretzels). The CD was Billy Bragg and Wilco’s, Mermaid Avenue. A collection of songs shaped around Woody Guthrie lyrics. That album sealed the deal for me with songs for the ages- California Stars, Another Man’s Done Gone, The Unwelcome Guest, Ingrid Bergman. Absolute, timeless, gems.

With the release of Summerteeth I was starting every mixed CD I forced upon people with Via Chicago and testing people’s patience at bars with vivid explanations of the song, “… the guitar solo is like throwing a hand full chews (the gum you could get for 25-cents out of the machines at the mall) in your mouth- too many chews because, you know, too many chews is the only way to go… it starts awkward, spikes when it takes that super sour twist that has you reeling for a moment before smoothing out, before landing, as something delicious and perfect… that initial discomfort making the payoff all the more potent.”

While most friends tolerated my flights of descriptive derring-do and tried to move the conversation back to more communal topics a few friends- Stu and Borto ended up being as into the music as I was. We started going to Wilco shows which cemented the love even further. The first show was a revelation with Jeff Tweedy proving to be a witty, self-deprecating, front man on the few occasions he addressed the crowd. That night Wilco proved themselves to be a band equally capable of pulling off straight up, infectious, punk-rock while simultaneously having the courage to wander off the beaten path taking risks in pulling off more complex numbers. Near the end of the show there was a moment that will always stick with me. They performed Misunderstood– “Back in your old neighbourhood  the cigarettes taste so good…. but you’re so misunderstood.” And as the quiet twinkling piano was swallowed up by waves of chaotic feedback, I looked down from the balcony at three band members, backs to the audience, cradling their guitars, hunched down before their amplifiers increasingly frustrated as they tried to coerce the feedback remotely along the original parameters of the song but failing. They just seemed so immersed in the task, so passionate about finding that right something to hit the emotional need of the tune and so unable to do it. They’d taken the risk and they were failing. I admired it. Misunderstood ascended from the chaos still coated in abstract feedback but more defined by the onset of staccato drum bursts and power chords with Tweedy yelling, “I’d like to thank you all for nothing! nothing! nothing at all!” And here, the frustration of what they couldn’t find was completely exorcized with Tweedy, face red, body lurching up towards the microphone let it all out, with protracted screams, “Nothin’! Nothin’! Nothin’! Nothin’ AT ALL!“

It was magnificent release. It was a moment for the ages born of a moment of failure.

And that was, is, Wilco at its’ best for me. It’s the same phenomenon with less sharp edges and histrionics Fricke references when he writes, “… the enchanting sound of things falling apart — and gingerly, doggedly coming together again. This is an honest, vivid chaos, and it tells a good story.“

I kept on seeing Wilco until it happened- I stopped loving them. I don’t remember the exact place, it was a Toronto show for sure when Wilco introduced their long, droning, version of Sunken Treasure, essentially robbing the tune of everything I loved about it. It was painful, it was a mood killer. But hey, it’s only one song right?

The last time I saw Wilco was at Artpark in Lewiston, New York in 2009. From the first time I saw them at Phoenix Concert Theatre almost ten years before, to 2009 the band beyond Jeff Tweedy and John Stirratt had completely changed. The resulting new band and dynamics increasingly irritated me. From the death of Sunken Treasure, to lead guitarist Nels Cline’s love of flying up and down the fretboard seemingly willing to play the same incessant super-fast strumming exercise in sonic pointlessness nonsense, to the same old-same old gimmicks and crowd interactions. Maybe that stuff was for somebody but that somebody wasn’t me.

Did they become objectively bad after producing their last great album A Ghost is Born in 2004? No. They just became a band that, to my particular set of ears, offered only diminished versions of past brilliance. I realize though, that’s purely subjective and more likely than not it was a simple as us going our separate ways. And I think if we’re going to talk maturity I should, instead of resenting what came after the love, just appreciate the love. Art is never forced on us right? So taking offence to anything you don’t like is a fool’s idea of what an opinion is, in that, it’s important to remember there’s always the option to not have one.

Making this playlist, finding the right balance between Wilco’s whimsical flourishes versus their, at times, more sombre explorations was a challenge but a highly rewarding one. Between the Being There album and A Ghost is Born (Billy Bragg collaborations included), 1996-2004, Wilco created a wildly diverse, wildly fun, wildly profound, collection of music to love. It’s nice to return home and be reminded how much it has to offer to me.