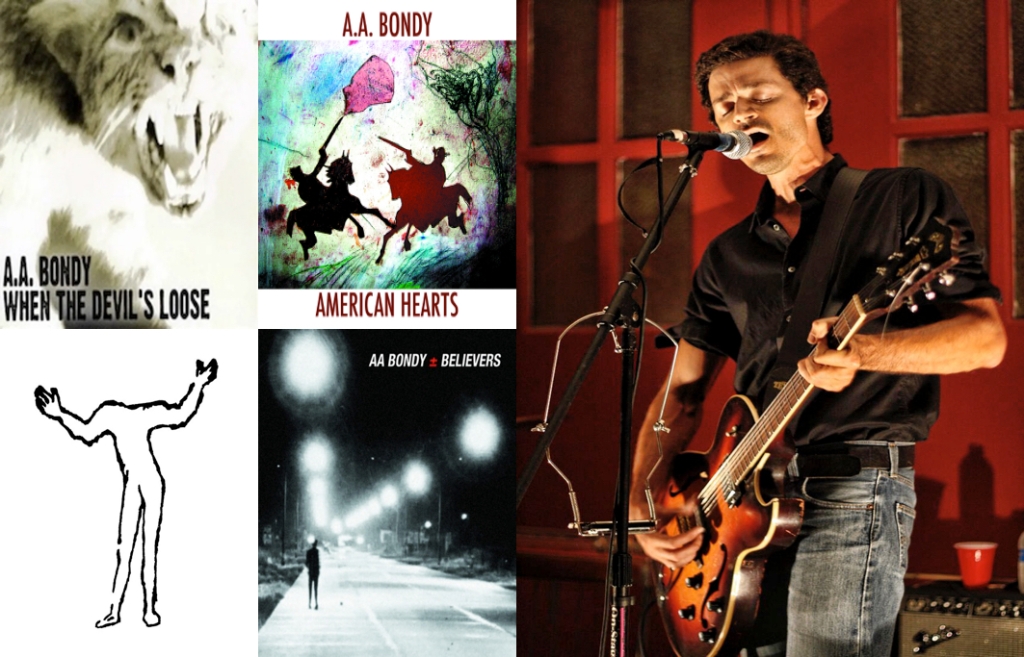 “And I’m falling down
Where the waves will surround
To the roll and the pound
Of the wild, wild sea
Talking sweet to me”

And maybe that’s all you need to know about him. In 2007’s American Hearts and 2009’s When the Devil’s Loose, Bondy spun only magic.

“This is the light that shines
And I can see the pines are dancing
This is the leaving of another love
This is the howling at the moon
These are the arms you fell into
I am a fire, and I must burn today”

AA Bondy, The Pines Are Dancing

If you feel the need to know more about Bondy the internet is reluctant to shed much light on the man and his music. Wikipedia offers not much more than an abbreviated sketch. Bondy was born in Mountain Brook, Alabama, and attended Mountain Brook High School. But you could have guessed that. From 1994 through 2003 Bondy was part of the excellent alt-rock band Verbena.

But maybe you could have generally guessed that as well. When you throw on either of Bondy’s perfect albums you know he’s American, you know he’s not from New York or anyplace like it, you know that the gorgeously strung together, intimate ruminations, are the fruit of the morning after a much messier, more extroverted, voyage into the world.

AA Bondy, Killed Myself When I Was Young

In lieu of the internet’s unwillingness to provide much more information on A.A. Bondy one is tempted to fall into the tendencies of bad wedding speeches, i.e. “Webster’s dictionary defines music as, “an arrangement of sounds having melody, rhythm, and usually harmony classical music…” Or, to tell you that I discovered Bondy watching a solid TV show- as the Youtube clique likes to say, “Friday Night Lights brought me here…”

Aquarium Drunkard: You put out your first three solo records about every two years for the first little span, but now it’s been seven, almost eight years since your last record. What’ve you been up to?

Bondy goes on to talk about spending the nine-year gap where he wasn’t producing music travelling across America, crashing on friends couches, “eating drugs,” surfing and being turned on by random bits of music that floated his way at various parties.

And I love that. To be honest I didn’t read the whole interview beyond that because I didn’t need more. And neither should you,

Bondy’s musical renderings, like his bare bones Wiki bio aren’t going to shock you- He’s American, the music is American, it evokes blonde hair sparking in the sunlight. It’s tanned, bare, feet, dipped in a cold lake. It’s warm coffee and breakfast specials at glorious greasy spoons. It’s love and loss. It’s slow waltzes and sudden crashes. It’s time sifting through everyone and everything. It’s quiet moments before loud decisions. It’s the simple acknowledgement that if there is a crossroads providing the options of emancipation and captivity, they often look similar on the surface. It’s warm consolation for all our uneven intentions and accomplishments. It’s the familiar presented in its’ most beautiful form.