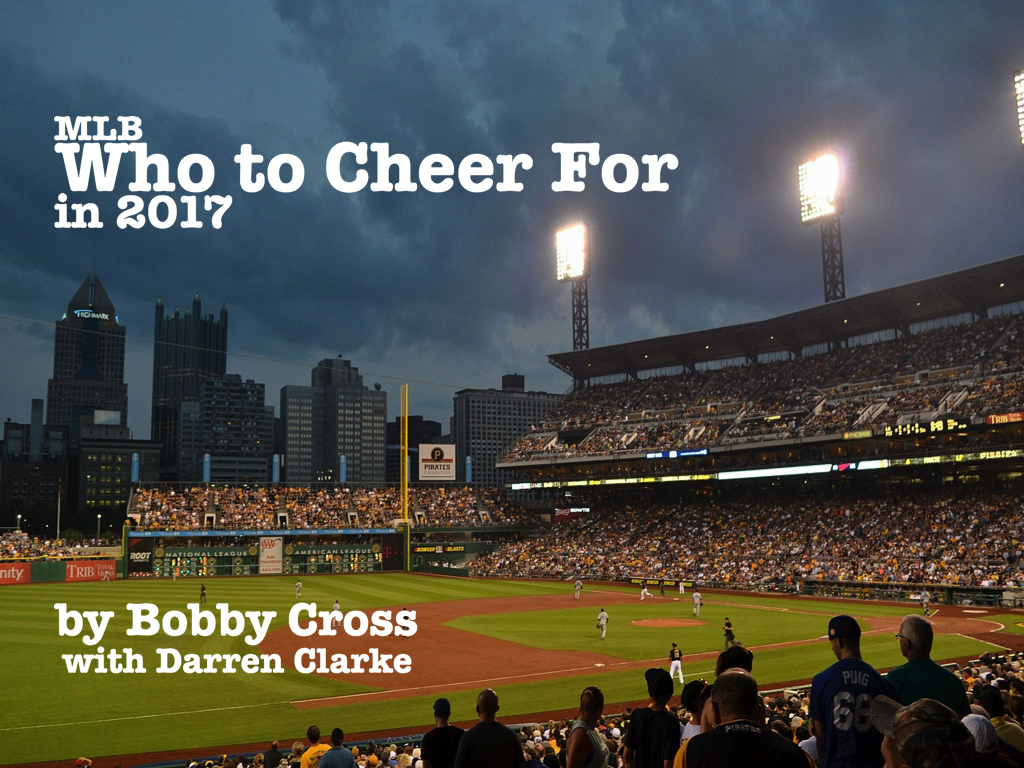 by Bobby Cross, with Darren Clarke

With less than a week until peanut vendors at Kauffman Stadium put on their thermal underwear and all 30 teams are in first place, the not-so-regular baseball fans might be looking for a team to cheer for. Sure, it’s nice and easy to cheer for the hometown team, but really, why limit yourself to cheering for and following just one team this year? All my life I’ve been a Jays fan, but I also consider myself a fan of the Cardinals and Indians. From season to season I also find myself cheering for an up-and-coming team that is fun to watch. In the past few years those teams have included the Royals, Mets and Pirates.

With that being said, what teams should you cheer for this season? If you have a choice of what team you should be watching on tv, which will it be? That’s where I step in. I’ll give you a breakdown of a few teams that I might find myself rooting for. I mean, after all, a lot of fantasy baseball owners ramp down their paperwork during the season because their teams are already picked. Summertime is for watching and enjoying baseball. So, without further adieu, here’s who I’d suggest cheering for, followed by a few bonus choices from Darren:

Miami Marlins: The past few seasons have seen some really good teams in the NL East – none of these teams have been Miami. The Marlins haven’t had a good team since they were known as the Florida Marlins back in 2009. I feel that this team has a decent shot at finishing above .500. Looking at their offense, they look like they will be somewhat exciting to watch. Losing Jose Fernandez last season, many felt that this would set them back another 3-5 years. They have the depth on the mound, if some of this spaghetti sticks to the wall, I think they’ll be alright. Their bullpen might be the most exciting in the league this year. And hey, they have Ichiro. Who doesn’t want to watch a guy that is within a month or two of catching Rod Carew, Rickey Henderson and Craig Biggio on the all-time hits list?

Pittsburgh Pirates: It’s going to be really, really hard for the Pirates to make some noise this year. Being in the same division as the Cubs and Cardinals, you can expect that the Pirates only chances of making the playoffs will be fighting for a wildcard berth. That doesn’t mean that the Pirates won’t be fun to watch. I think they have a good chance of being a 90 win team this year. With studs like McCutchen, Polanco, Kang and Marte, their offense is sure to “Raise the Jolly Roger” (I’m not even sure what that means, really). By the end of this season, they might have one of the youngest and most skilled pitching staffs in the bigs. Also, if anyone out there has NOT been to a game at PNC Park, you need to go. Now. Or as soon as you can. Beautiful park, cheap tickets, cold beer and the fans aren’t assholes.

San Diego Padres: I know, I might be crazy, but I’m tossing the Padres on this list because they will be the EXTREME underdog this year. Their lineup is full of really young players (some seeing their first big league action) trying to make a name for themselves – this is the exciting part. I’m looking over their roster and seeing only five players over the age of 30. It’s sunny in San Diego. Their home games will be late ones, which means you should be settled in and relaxing before bed. It might be really fun to watch this team become a Cinderella story this year.

Houston Astros: They could be really good this year. I know that people have been saying this for a few years now, but I have a feeling that the Edmonton Oilers of Major League Baseball is on the brink of being spectacular. With Jose Altuve and Correa surely to be in the MVP contention, they have a proper mix of youth and veterans. Part of the fun of watching Houston’s home games used to be waiting to see a deep fly ball hit to Tal Hill in center field. It could make for some amazing plays as well as some downright ugly miscues but sadly 2017 marks the end of Tal Hill. Loss of the centerfield incline notwithstanding, Minute Maid Park remains a great back drop for a baseball game.

Darren’s Bonus Choices to Cheer For–

Minnesota Twins: The Replacements are from Minnesota, Prince was from Minnesota, Jesse the Body Ventura was Governor of Minnesota, so how can you not cheer for Minnesota? Well, to answer that I’ll start by telling you that Peanuts creator Charles Shulz is also from Minnesota. Now, if you can picture the cartoon with Charlie Brown on the mound, shoulders slumped, staring sadly into the outfield lamenting, “Nine home runs in a row!! Good Grief!” That, that is why maybe you don’t want to cheer for the Twins. Pitching or a significant lack thereof. I don’t know where hope is going to come from for their pitching staff other than say magic, magic beans, or some kind of biblical act, maybe God gets angry with every other major league city and takes the top four hitters from their lineup but beyond serious pitching concerns the team should be fun to watch. Max Kepler is the best German baseball player on the planet and while being the best German player on the planet doesn’t necessarily guarantee even in a starting job in America, Max Kepler, blessed with oodles of athleticism and a sweet swing, looks the part of not just a starter in the MLB but a star. Beyond Kepler both Byron Buxton and Miguel Sano appear just moments away from tapping into their massive potential and of course there’s always Joe Mauer. Now, before you get all, “Joe Mauer ain’t the player he used to be,” on me I ask you to remember that your mom likes Joe Mauer and if only out of respect to your mother, you should too.

Oakland Athletics: Because when you pick a team to root for you have to consider the accessories and Oakland has great jerseys, t-shirts, and hats to wear. Oakland’s colours take the best of spring and summer, embracing the green grass of a baseball field along with the golden sunlight of a sunny afternoon at the ball park. The logo is simple, it is timeless, it can go out with you to a bar looking casual in the all important not-trying-too-hard kind of way. When it comes to the actual team and playing the game it gets a little dicier. Ever since Oakland jumped the shark in 2014 in an attempt to bring the Moneyball bus a, “… and we won a World Series!” bumper sticker this team has gone deeper and deeper into the wilderness doing things that teams that wish to be competitive just shouldn’t do like giving Yonder Alonso a full-time gig. Oakland also provides a decent-ish pitching staff with a defense that includes Marcus Semien playing shortstop and an outfield that consists of Rajai “Wrongway” Davis, in center, Khris Davis in left, and Matt “Last Name Not Davis,” Joyce in right. The good news though is that the girl you’re chatting up at the bar while wearing your cool, “A’s,” hat has no idea about any of that and could care less that Oakland won’t win 81 games this season.

Milwaukee Brewers: I don’t actually know where Milwaukee is and given the internet has shrunken the world down so that any geographic mystery can be eradicated by a single Google search I consider my ignorance both rare and precious. I will not do a Google search to find Milwaukee on a map, I will continue to remain blissfully unaware of its’ explicit location so that I can cheer on the Milwaukee Brewers as if I’m cheering for other similarly fictional teams, Roy Hobbs and the New York Knights or Reg Dunlop and the Charlestown Chiefs. If you are looking for more baseball relevant reasons to give a little of your loyalty to Milwaukee consider the electric possibilities of the double play combo of Jonathan Villar and Orlando Arcia, believe in the power of positive yoga with Eric Thames returning from his Korean sabbatical to flat out hit, and remember that Ryan Braun is still a very good ball player. Maybe, just maybe, the pitching will be good enough to make the Brewers surprisingly competitive for a portion of the summer (it won’t, but you’re a Brewers fan now, it’s time to start suspending disbelief).

No matter which team you decide to follow this year, enjoy it. I hope you find plenty of opportunities to turn on a game, close your eyes, take a sip of beer and let it take you away.