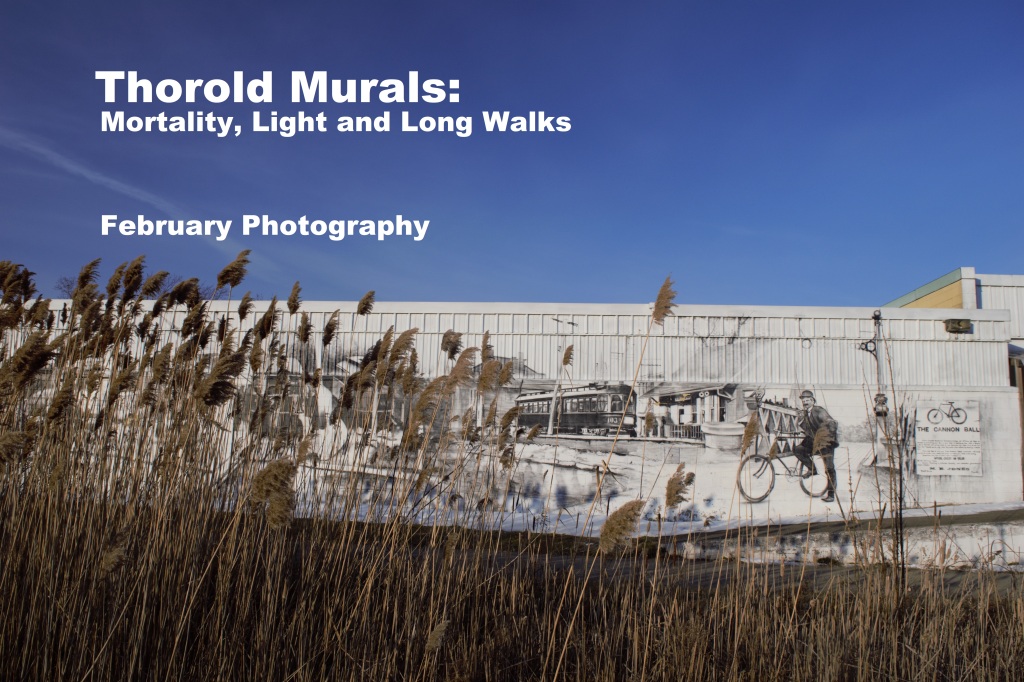 Brought to life by artist Shawn Reimer and a league of volunteers in 2007-08 the Thorold Murals are located along the Welland Canals Parkway between Locks 6 and 7. The murals that extend for roughly 1,800 square meters liven up an otherwise mostly-forgotten, mostly-vacated, industrial slice of Thorold, Ontario and are billed as the largest murals in Canada.

Ten years after their creation the murals remain in decent condition despite the impact of the elements and wayward vandals. I visited the murals four times over the past week (mainly because the sun was so elusive) and was amazed how much changed on each occasion: New graffiti, a board behind a window torn down, a shopping cart chucked in the ditch, a skate board broken in half.  I was also lucky enough to run into the legendary Mr. Falovo out on one of his routine epic walks around the city. 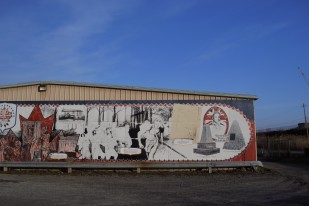 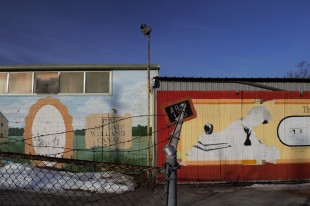 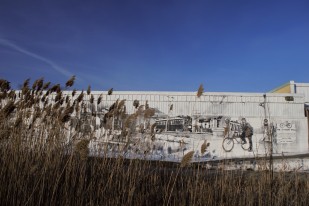 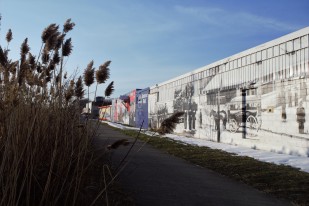 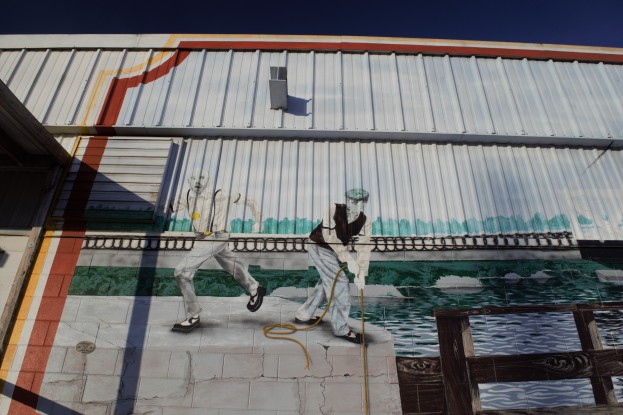 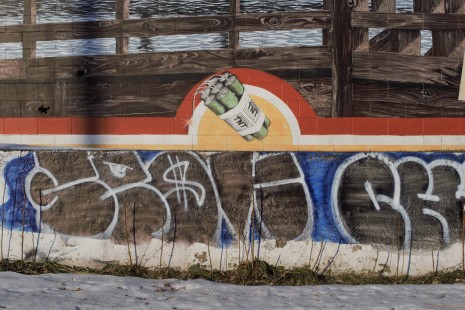 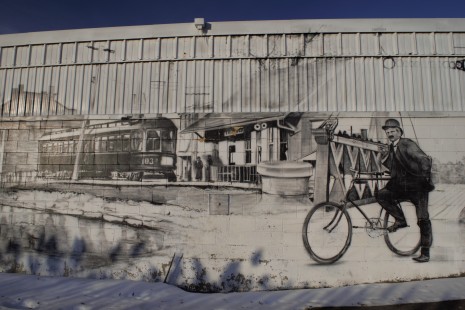 I grew up on Queen Street South in Thorold, just up the street from the Falovo’s and I can tell you this- nothing is more Thorold than Mr. Falovo. The Falovo’s house had tomato plants wrapped around old hockey sticks (Titan, Koho, Sherwood), grape vines climbing around re-purposed metal piping, home made wine, pasta in the cats’ bowl, a shed made out of absolutely anything and grandparents that only spoke Italian. I hung out with Gino and Anthony (aka Chobes/Choves) when I was a kid and their house was a window to another way of life, one I feel lucky to have been able to experience.

For as long as I have been alive there has been Falovo’s walking Thorold. As a kid I vividly remember Chobes’ grandfather, a legend in the city as, while he didn’t speak English, he was still very passionate about communicating, walking all over Thorold, particularly on warm summer nights. When I think of Chobes’ grandfather the first memory that comes to me is of him watching wrestling on Saturday mornings and how mad he would get at the Iron Sheik. Chobes’ grandfather would be up off his chair yelling in Italian at the old cabinet TV containing classic wrestling heels like the Iron Sheik and Nicolai Volkoff, doing battle with the likes of Ricky Steamboat, Tony “Cannonball,” Parisi and Angelo “King Kong,” Mosca.

In contrast Anthony’s father seemed to me to be a study in self-contained quiet. Mr. Falovo was however no less prolific a walker. The image comes quickly- After supper in the summer, the last light of day twinkling in the trees and casting long shadows, the diminutive Mr. Falovo emerging from his home and wrapped in his own silent world beginning to navigate the the sidewalks of the city.

I always wondered what Mr. Falovo’s inner world contained. What he thought about, dreamed about, hoped about, on his walks. Don’t think I’ll ever know though. And in today’s world it’s nice to revel a bit in the mystery of a man.

Back to the murals.

The Murals slogan/catchphrase is, “Taking our Community Back.” and in an era where fanaticism routinely finds its’ way into public discourse I originally mistook the slogan as another exercise in romanticized xenophobia. To its’ credit though the spirit of the mural walls isn’t about excluding those outside of the community or those within who don’t prescribe to a certain belief system, rather, it is, according to the website, about depicting, “… the people, places and events that have been important to the development of our city creating a story that connects our current community members to our past…”

The murals indicate that the choices for, “people, places and events,” representative of Thorold’s past tended to be aligned with what is generally considered acceptable as defined cornerstones of communities: Veterans, industry, faith, schools, transit, volunteer fire fighters. These are solid, uncontroversial choices. Choices I don’t necessarily have an issue with however I would note that, having grown up in Thorold, if it were up to me there would be some kids playing road hockey or soccer, some old Italian men playing bocce (perhaps engaged in a rowdy and demonstrative debate) a depiction of Mama Rosa’s pizza joint, kids in jean jackets fighting in front of the arcade on Front Street, couches covered in plastic and cars wildly driving the streets of Thorold in 1982, horns honking, Italian flags waving out the windows in the wake of Paolo Rossi leading Italy to another World Cup victory.

That’s the Thorold I knew growing up.

In the end though I love these murals. I love that what could have been just another worn out, run down, empty, factory landscape has been elevated into something else. something quite beautiful. Full credit to the city of Thorold, the various sponsors of the murals and particularly Shawn Reimer for a creating a great little spot to check out on a walk along the canal parkway. 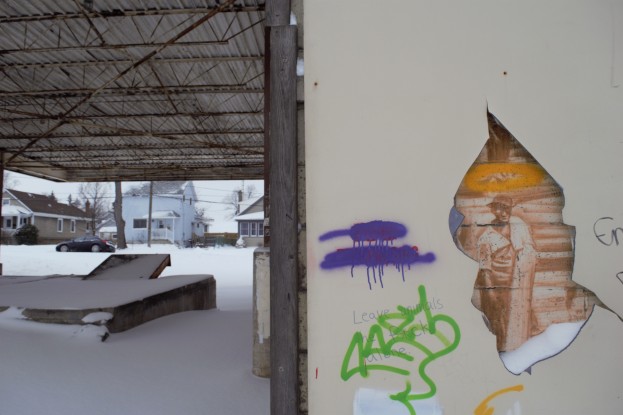 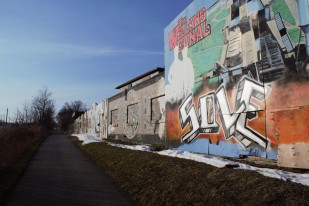 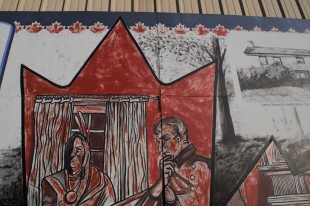 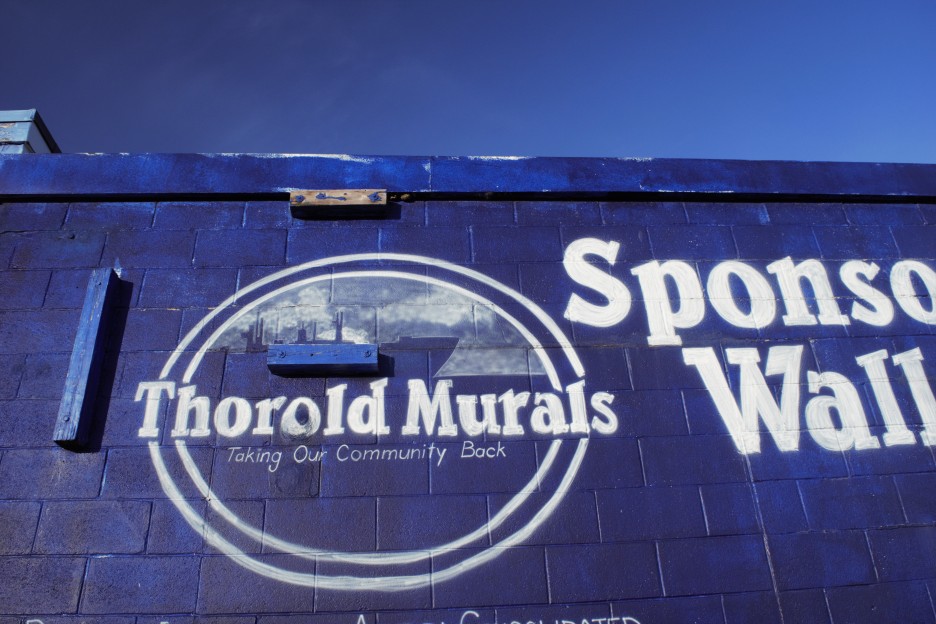 As I mentioned, ten years after the fact the murals still look great however, like any kind of artistic undertaking done in this kind of location the murals have been subject to significant amounts of graffiti and vandalism.  What’s interesting to me though is that some of the graffiti appears to have been done in response to the worst kind of lazy, destructive, spray painting.

Months ago when I was at the site I was disappointed to see that someone who was clearly bereft of artistic skill had gone out, purchased a can of spray paint, walked over to the murals and gone about painting as many penises on it as he could. I believe much of the current graffiti over top the mural actually covers this army of penises.

In any event, what’s interesting is that while some sections of the murals have been almost completely obliterated by vandalism many large sections have been left untouched- the Churches section, the veterans wall, the firefighters wall and the story of the bombing of the canal remain in excellent condition. What has undergone the most damage is the section attached to the paper mills and the large display about the canals themselves which appears to be being swallowed up from the bottom by vivid, lava lamp tinged, graffiti tags.

Elsewhere some images of people within the murals have fallen victim to the elements and now appear, perhaps poetically, as white washed ghosts void of any defining characteristics. 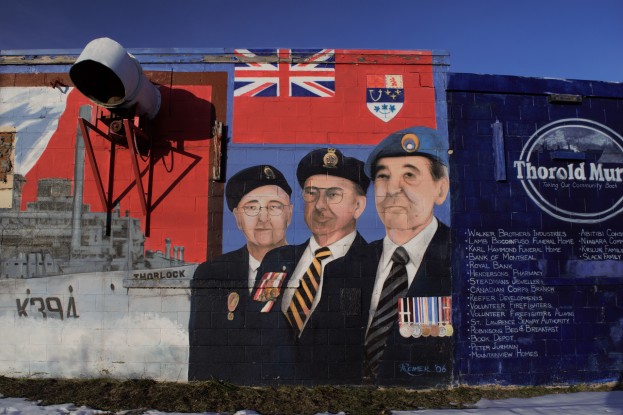 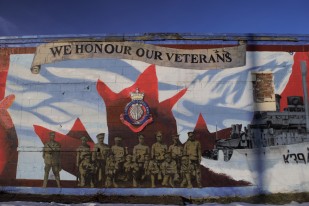 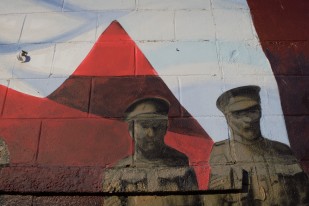 I’m not sure what the next ten years holds for the Thorold Murals but here’s hoping that the community continues to support such beautiful things and that sooner or later the murals will manage to incorporate Mr. Falovo undertaking his daily walk or working in his garden to the ranks of that which best captures what is remarkable about the community. 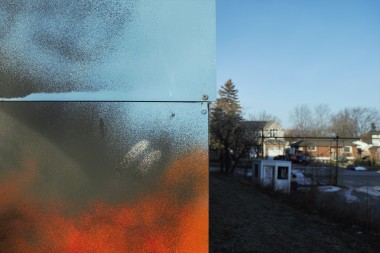 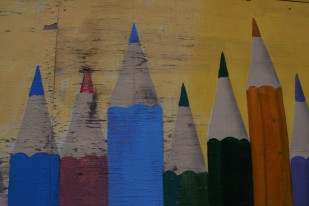 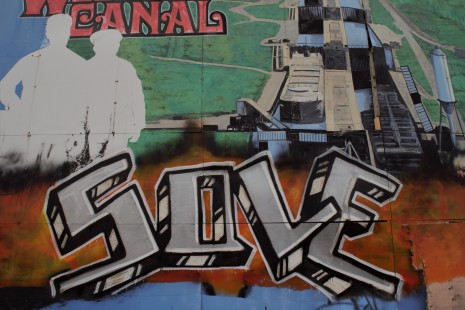