More summer mixes for the patio, the kitchen, the car, the picnic table.

“What’s so summer about them?”

I have no idea. They were conceived mostly on my patio if that helps. I guess though that if we sit down and look at this scientifically it all makes sense- You want fun Beach Blanket Kitsch? How about some Elvis Presley, Olivia Newton-John, T. Rex. You want long, wandering, Sunday drives? How about AA Bondy, Del Stephen and John Lennon. You want the adrenaline kick of a rambunctious night in the city ? How about The Eddy Current Suppression Ring, The Headcoatees, Thee Oh Sees, The Black Keys. You want some idle moments of shoe gaze? How about Skinshape, Night Moves, Faderdaze. You want some vintage 70s Euro-movie soundtrack nostalgia? How about The Vampire Sound Corporation, Giannis Spanos, Stavros Xarhokos. Something to accompany eating an ice cream cone on a late night walk? How about Kruangbin, DIIV, Metronomy. You want something funky for getting ready to go out on a Friday night? How about Dub Narcotic Soundsytem, Maceo Parker, Unknown Mortal Orchestra.

You can jump in and listen right away but in the meantime I’m going to share a little of what went into creating these playlists.

Mix #1 I struggled with until I gave AA Bondy’s, brilliant, “American Hearts,” album a spin. It never fails to slow my heartbeat down to the chillest tempo. So it starts there. Two tracks from that album.

The Avalanches make frequent appearences throughout these mixes mainly for their ability to capture the timeless sound of people at play- water balloons, running through the sprinkler, playing hopscotch- it’s all embedded in their musical irreverence. They got just the right kind of frolic and, as you know, many fail at finding the balance there.

Elvis Presley is in the building. I stumbled upon the demo version of, “Too Much Monkey Business,” during a long, wayward, hike through Youtube and I don’t know how you cannot love the song.

The two tunes from The Vampire Sound Corporation are from the Vampyros Lesbos soundtrack and are pure gold.

Coldplay appearing here is a surprise to me as I’d kind of consigned them to the, “Impotent Musical Dustbin,” of pop music long ago. But The Scientist is just such a great tune. I hadn’t listened to it in forever but throwing it on I was immediately jettisoned back to 2002, at the juke box in a bar on a Hartzel road St. Catharines, telling the waitress (also a fan of the song), “If I had to choose a way to die it would be jumping off a thousand foot tall building right into the heart of this song.”

Mix #2 begins with my friend Del Stephen’s, “Searching for a Midnight Remedy.” The tune reminds me of going to African Lion Safari on a school trip when I was in Grade 5. Light chucking through school bus windows as we ambled through the world of lions and tigers and grizzly bears.

There’s tons of shoe gaze from the here and now on this mix. Skinshape is easily one of the most irresistible of my recent musical crushes.

Parquet Courts is my, “I want to put a Pavement tune on here but I feel like I’ve put too much Pavement on my mixes,” backup choice most every time.

The Replacements close things out with a cover of, “Hitchin’ a Ride.” This is from The Replacements latest live release which never fails to frustrate me for the fact Paul Westerberg’s voice is clearly chewed for that show. Still the energy of the tune is pure Replacements in their prime- a joyful kind of fucked up that speaks more to what they offered to the world than all the silly romanticizing of indulgence and impertinence that biographers gild up for consumption these days.

T. Rex is another frequent flyer on my mixes. There’s just a great ease to their glam. Many have posed, few have pulled it off as effortlessly as T. Rex.

Carla Thomas appears as well here with, “B-A-B-Y,” which is a total ode to the fact I recently watched the movie Baby Driver for the 70th time. The music for that movie is off the hook perfect.

There’s also two Kinks tunes here in lieu of me digging into the two Preservation Act albums. Gems that I had ignored for two long in wake of the overwhelming abundance of albums the Kinks churned out in the late 60’s and early 70’s. 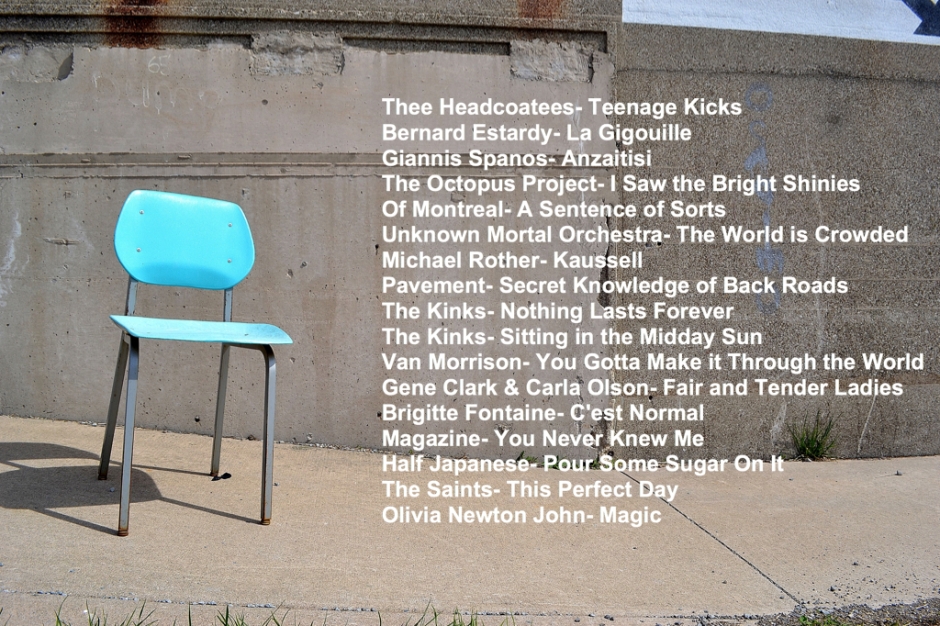 Sonic Youth is my ultimate reluctant love. Their music is just too delicious, to much a perfect mix of melancholy and mischief for me not to be pulled in despite the fact I find the band themselves to be a too-often tedious collection of slacker happy individuals.

This mix though was shaped by them kicking things off.

Tim Hecker, my main man Tim Hecker, serves as the dividing line in Summer Mix #4. He serves up the best slices of nuanced white noise to cleanse the palate as to allow for total appreciation of that which follows.

My wife loves The Cure. And I’ve kind of caught on over the years. These early tracks from them are a great kick in the pants for the mix.

Maybe my favourite track on this mix though- The Black Lips, Kiss It Goodbye. Infectious. 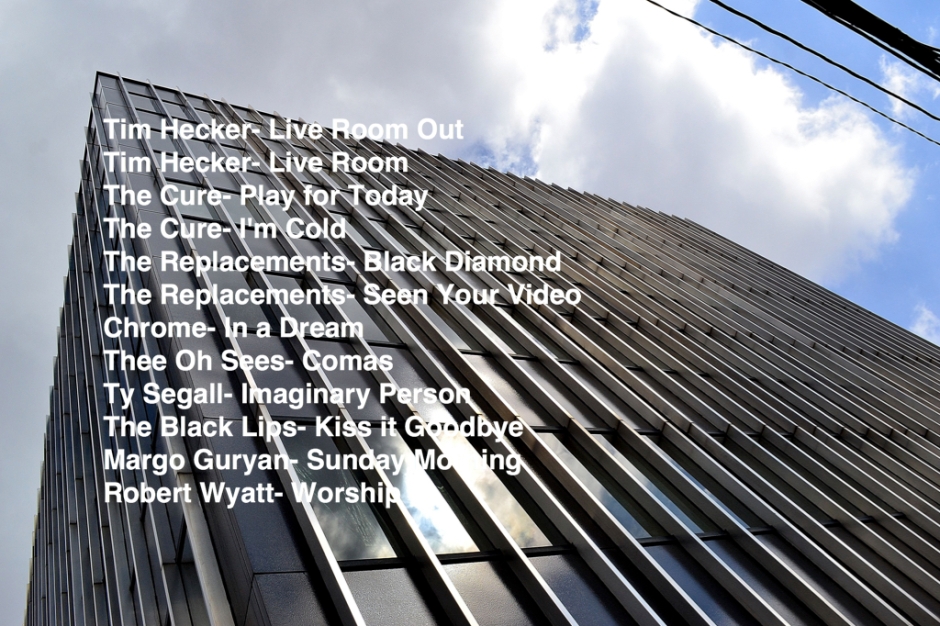 Mix #5 might be my favourite. Love it from start to finish. And it starts with Caribou.

Man I love Caribou. I adore their complete disregard for fitting into a certain category, their devotion to the tune itself. It’s the best kind of magic, it sneaks up on you, it delights you.

Maceo Parker, James Brown’s, “MACEO!” saved this mix though. I needed something glorious to follow Caribou and I woke up one morning thinking, “Maceo.” Maceo is the answer. He often is.

I had the Rolling Stone’s Angie earlier in the mix before I inserted Maceo into Mix #5. “Does the world really need to hear Angie again?” I wondered. But yeah, it does. It kills at the end of this 90-minutes of musical wandering. 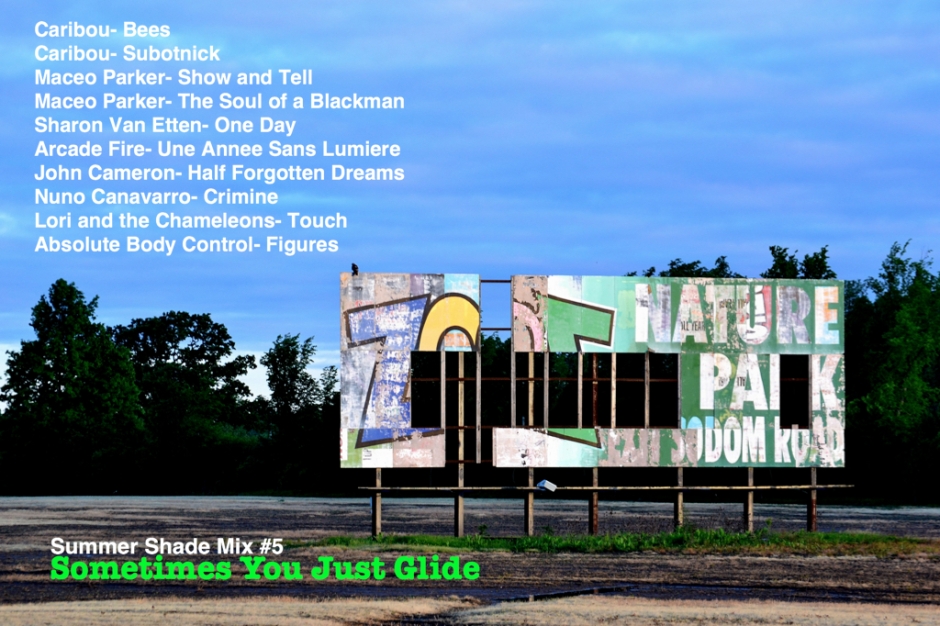 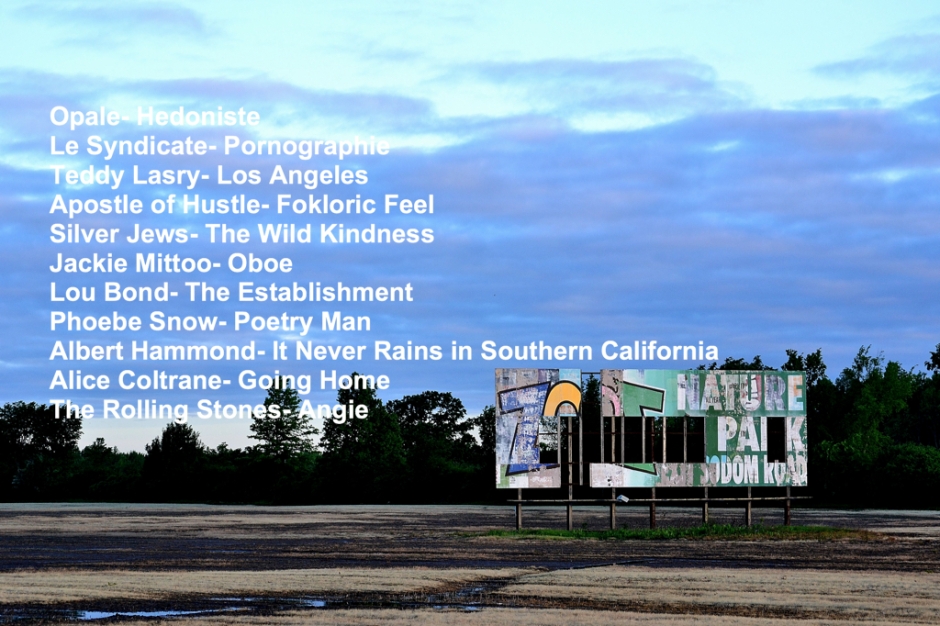 Mix #6 amply displays that sooner or later I will seek some funk, some noise, something a litter more distorted and playful.

Dipping into Dub Narcotic Soundsytem to start, that’s the sign some noise is to come. It foreshadows the need for something a little more unsettled.

Bob Dylan also has a couple tracks on here. A month ago or so I was at a restaurant in Fort Erie, Ridgeway, to be specific. There was a table full of people there that, it became clear, were there to celebrate Dylan’s birthday. It didn’t take long for me to get sick of hearing Dylan hyperbole.

But the dude was pretty good. Or so I was reminded the other day dipping into his back catalogue. Warning though- My wife complained that our cat was unhappy with the volume of the harmonica in, “One More Cup of Coffee,” though it bears mentioning that our cat seems to share all the same dislikes as his official spokesperson. So maybe it’s not a cat thing really. 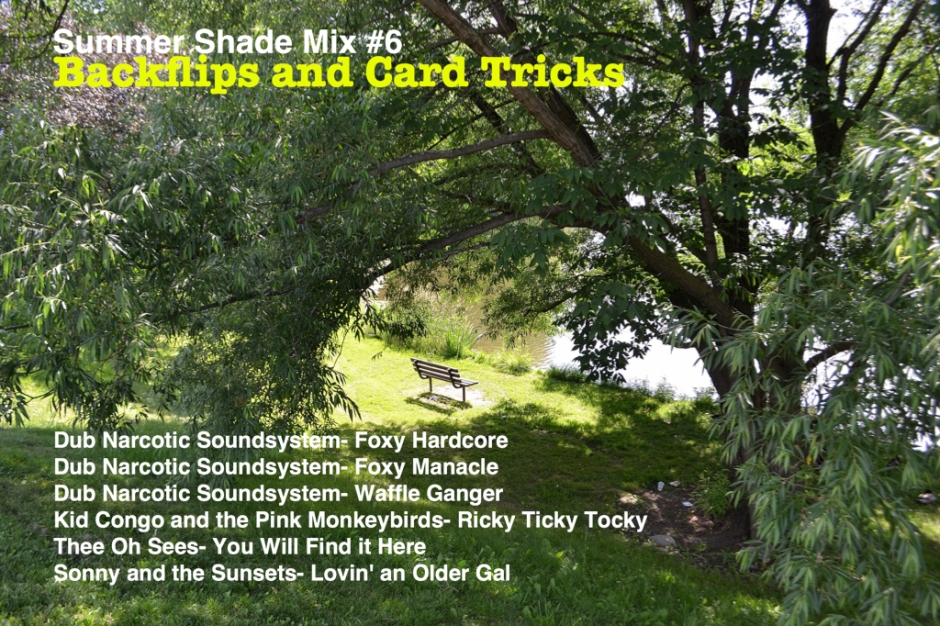 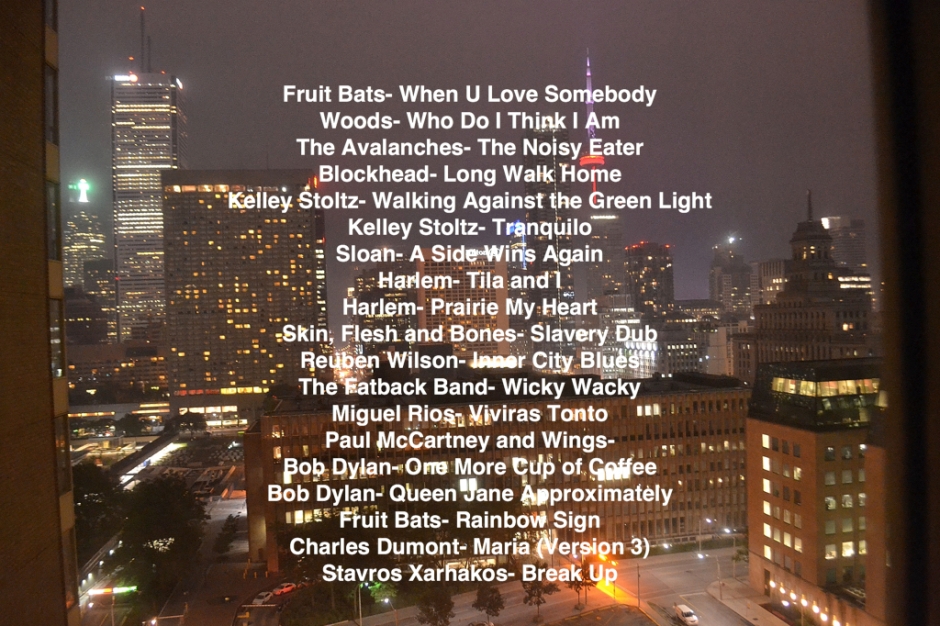